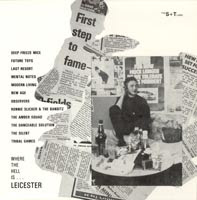 Various Artists - Where The Hell Is Leicester LP, 1981

Here's a compilation of bands from Leicester that is quite rare and I don't believe it has appeared on another blog. I don't know much about the bands here. Amber Squad apparently have a CD out on Detour records, and there is some info out there about Deep Freeze Mice as well. I can also tell you that the Observers released at least one 7" single. New Age is the band here I am most familiar with. They were on the Dining Out label and I own their entire discography (one LP, one EP, one single) which can all be found on Mutant Sounds' blog. He couldn't include all the sleeves, though, because the truth is he got it all from me some years back and I didn't have them scanned then! This presents a dilemma for me in the sense that I don't know whether to post this stuff again just because I have the sleeves or whether I should just let it stand that it's all available on his blog. I have a few more records that I have the same dilemma with. Maybe some folks will weigh in on what they think I should do. Anyway, the song by New Age that appears on this comp wasn't actually released anywhere else and it's quite good. Overall I think only about half of what's here is good, but then solid comps of obscure post punk are quite rare, aren't they? It's all about separating the wheat from the chaff. I'm probably not going to make a regular habit of posting comps or even entire LP's here in the future, though.

Sorry Bimble, but "Where the hell is Leicester"
is not loadable (z-share loops ....)
please reload these file again or better via rapidshare.com z-share is a lame and lousy "service" no comment...
regards
TSt

Agreed. Dunno what happened to Z-Share but it's generally pretty useless these days. Mediafire's the best by a long way...

One another thing: on the subject of Leicester comps, I'm after one from the mid 80s on Cordelia Records (the title of which escapes me, rather helpfully) which features an otherwise unavilable Yeah Yeah Noh track called "Trini Lopez" - drop me a line if you can help! IBx

Oh you wonderful soul for mentioning Yeah Yeah Noh!!! Oh man, I've got this comp of them I have to dig it out. Maybe I'll get lucky and that song is on it already. But I doubt it. :)