I know I've kindof quit with this blog of late. I should do the Grace Cale's Dubset soon because I do have the sleeve now. I don't feel motivated, though.

I'm happy to tell you that I'm ordering this 1981 7" single by Jo Callis (brunette lady from the Human League) that I really want to put up because it has at least one absolutely fantastic song on it. I will be really happy if I can get this record.
Posted by Bimble at 8:47 PM 2 comments:

Thanks for your patience.

Requests for Ski Patrol & the first album by The Thought

Oh man, I'm so sorry folks. I have received your requests. I wish I could wave a magic wand and get these files reuploaded. I'm particularly fond of Ski Patrol & the first Thought album, so it hurts me in my heart to be asked for these things again. The good news is I've got this stuff on CD-R, so it shouldn't be too hard to reupload this. I'm gonna start by digging out the Ski Patrol right now. Man, I'm really sorry.
Posted by Bimble at 4:55 AM 3 comments:

As requested, I have reuploaded the Propaganda LP from 1981. No, not the German band. This is a different thing. You can find it here.
Posted by Bimble at 1:28 PM No comments: 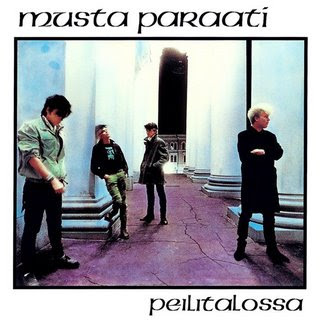 I found this by accident, someone gave me a link to the goth rock list on rateyourmusic.com and this was on it, so I thought I'd check it out. And it's just grand, it really is. Some Finnish band. Doesn't even bother me that the lyrics aren't in English, these guys just made some really good quality goth music. A little like Bauhaus, but not too much. Some synthesizers here and there. Once I start playing this I don't want to turn it off. I think this is much better than the Pink Turns Blue record I posted as far as goth goes.

Here's a link I found about them.

Apparently this record was released on CD in 2001, but I don't think you can get it anymore. I can't even find anything by them on ebay.
Posted by Bimble at 4:49 AM 1 comment: 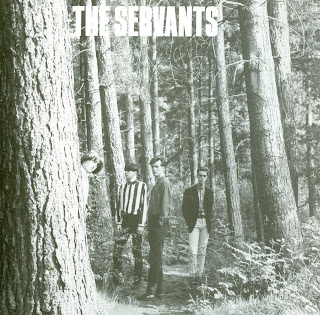 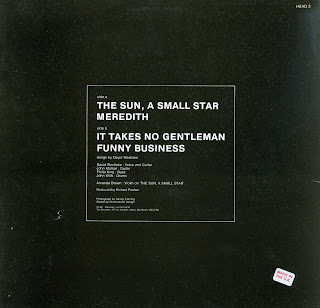 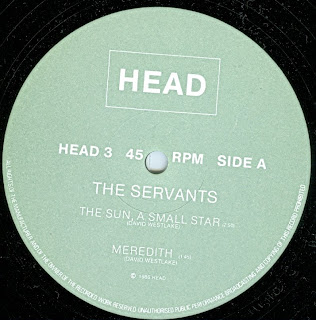 That's right, we're going back to 1986 UK indie pop again. Good old fashioned stuff, here. I would imagine folks who like Sarah records would probably dig this. I posted a 7" by this band earlier, but to recap, they appeared on the NME C86 cassette and to me they really stood out. Later, the singer David Westlake (pictured on the far right of the sleeve) released his own record on Creation that I might post later. Also, Luke Haines of the Auteurs eventually joined this band. The bassist here, Phil King, went on to play with Lush. Well it's really the guitarist of this band, though, that makes them so special, I think. The sleeve says he was called John Mohan. "It Takes No Gentlemen" is the best track here, and it totally makes me feel like I'm 15 again. It occured to me while playing this that if some new band were to make music like this now, I wouldn't go near it. This was just the fashion at the time, and the way things sounded. I'd be surprised if there was a single other record released on this label, either. This was about as indie as it gets. I'm delighted to learn that Cherry Red have released a CD of this stuff, now, called "Reserved". Hell, I'm gonna buy that sucker.
Posted by Bimble at 4:15 AM No comments:

Bouncing In The Red, 1981: A compilation of bands from Birmingham 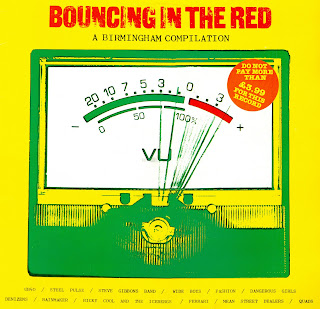 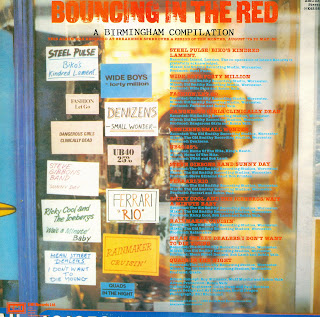 This is a really cool compilation. Steel Pulse are a fairly well known reggae band, so I won't talk about them, this track by them is just okay. That Wide Boys track, I love the groove on that. The singer is this soulful mod-sounding dude, but yet the music is sortof dubby & funky. Excellent guitar sound. Fantastic post-punk. Fashion I already posted a 7" record of, and if you go to their myspace you'll see the singer has assembled a band and is still actively making music, this track should be available on CD in the next year or so. Dangerous Girls will be known to people who own the Messthetics comps (hyped2death.com). I used to be really nuts about that band until I bought three CD's of them from the drummer online and found they couldn't sustain my interest after awhile. Denizens are on Messthetics as well, and I was never nuts about them. This track is okay. The UB40 track is an instrumental (kindof neat, an instrumental by them). My friend tells me this track appeared on their first album. The Steve Gibbons Band track is hilarious, kindof like Nick Lowe I guess. I guess Stiff label fans would like that, but to me it's just too goofy. As for the Ferrari track - damnit I love jazzy shit like that with horns. Danceable, even. Ricky Cool & The Icebergs is a great band name. It sounds like hoppy boppy music from the 1940's though. Not bad, just odd. Rainmaker - back to the funky jazzy fun! An instrumental, very good stuff. Mean Street Dealers (love that band name, beats Manic Street Preachers anyday) is punkish pop, but I guess people would probably call it punk. It's certainly competent enough. I think those synths in the background are a WASP? Ha! As if I really know my synthesizer brands. Seems to me they try to be Can at the end and fail miserably, though. Quads - wow! A track I'd never heard from the Quads before, how cool. I've got a few other tracks from them, just a few. This isn't really what I would have expected from them. Is this power pop? Or is it too jerky & odd? Would early XTC approve? Haha.

Be Patient With Me

My soundcard for my computer broke, but when I bought a new one, it wouldn't let me hear my vinyl. I was devastated.

I'm ordering another one just like my old one, now, though. So hopefully I will back in business soon. I'm really sad to think I can't rip this 1981 Birmingham post punk bands compilation to my computer. A temporary problem, I hope.
Posted by Bimble at 6:31 PM 6 comments:

Okay, the Industry album is reuploaded now. Find it here.

This means I can finally disconnect my computer to rip the Birmingham post punk bands compilation at long last!
Posted by Bimble at 3:39 PM No comments:

I'm horrified to learn that the Industry album is lost to Zshare as well. I'm very sorry. I must reupload that. Very sorry indeed.

I just have to get over this Stevie Nicks/Cheap Trick phase first.
Posted by Bimble at 5:41 AM No comments:

Alright, look I know I've got this mania about Cheap Trick and Stevie Nicks, but I have to settle down and try to play something else for once.

I know, but you see this is my fave song in the world. That and Stevie Nicks "Outside The Rain".
Posted by Bimble at 12:17 AM No comments: