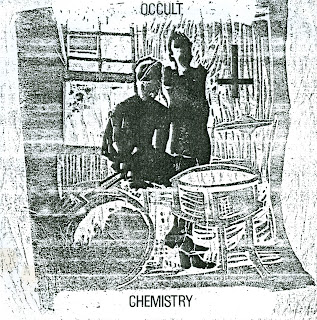 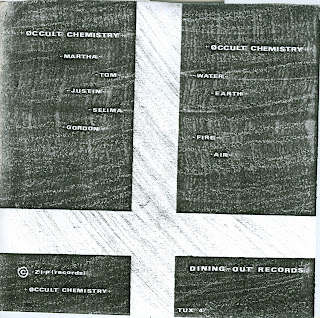 I am so eager to put this up cause I just got it in the mail (post as the Brits say!) and I think it is WAY cool. I didn't find any other blogs that had it up, either, but feel free to prove me wrong. Another 7" on the Dining Out label. I have no idea whether this was '79 or '80 but I seriously doubt it's 1981. This was the band that had Martha Tilson singing, a lady who went on to do some vocals with A Certain Ratio circa their Sextet album. Now, I'm a pretty big fan of A Certain Ratio, but Sextet is just about my LEAST fave album of theirs up through the early 90's and I really didn't like her vocals with them at all. But she does just smashingly on this fantastic slice of DIY punk! It's not as funky or radically political as Delta 5 or Au Pairs, and it only bears a passing resemblance to A Certain Ratio...it reminds me of early Dislocation Dance a bit. Yeah that's about right. Sorta like early Dislocation Dance. I really like this EP a lot, I want to play it over and over. And charmingly, the sleeve consists of two pieces of paper CUT OUT BY HAND that weren't even glued together. Notice the cheap black and white copy of the sleeves, too. I deliberately left the scan of the back sleeve to look lopsided because I wanted to stress this thing was cut out by hand. God, it doesn't get any more DIY than that. I don't know if Chuck Warner has ever put these guys on a Messthetics comp yet, they certainly weren't on the original 8 discs of Messthetics, but I can SO see this being put on one of those. Another piece of trivia: notice this is the next release on the Dining Out label after the Insex 7" I posted earlier.

Oh and did I mention I really love this record?
Posted by Bimble at 1:39 PM

This stuff is really great. Thanks for posting it. The haunting piano line in "Fire" gave me the chills.

I'm very glad you liked it! Music gives me the chills sometimes, too. It doesn't happen very often, but I guess if it did I wouldn't appreciate it as much.

Bloody hell is this amazing. Been looking for it for years. Cheers!

Really? See about 4 years ago when I was trying to collect these Dining Out records I remember seeing this available but I passed up on it for some reason (perhaps figuring it wouldn't be that good...and it was much more expensive than the rest due to the ACR connection). I'm delighted you like it!

If you don't have it, I can make The Sinatras' "Happy Feeling" 7" (Dining Out Records) available for you & your blog.

That's really nice of you! But I already have that one and was gonna put it up soon. I'm working on getting another Sinatras 7" as well.

i'm a huge acr fan and these four tunes have completely taken oer my life. thx so much fr posting this fantastic record.

I'm so glad you like it. I love ACR, too. In fact, I've been thinking of putting up the Good Together album if I can just get a decent vinyl copy to do it with!

I was living in Whitechapel, London then & showed my friend Glenn (aka Gordon Calm) a series of poems I'd written. His grandmother had just died so he had a little money for a proper 4-hour studio recording session. Friends got together and we whipped up the songs in a few days. Later, Gordon's friend Selima added the flute & Justin Thyme the piano (he's the drummer who also did woodcut for the cover, I think). We never played live.

Funny thing about Dining Out Records is that there were actually 2 independent labels in London calling themselves that. Gordon Calm (located in East End of London) put out two records on his label (his other record is the Twilight Zonerz). The other label was based somewhere in the western part of London (I believe).

BTW, Chuck Warner tracked me down and is including "Water" on the next Messthetics regional disc.

Wonderful to hear from you! Thanks for your comment!