I'm having severe computer problems. My laptop is in the shop for repairs. And it makes me so sad because this lovely Birmingham post-punk band LP compilation from 1981 is waiting so patiently by my turntable, ready to be faithfully ripped...*cries*

I can't even seem to use email now. I'm on a dinosaur computer right now. I'm lucky to be able to post this to my blog. Yikes.
Posted by Bimble at 3:56 AM 2 comments:

I do have a couple of things planned for this blog soon...a rather strange and obscure record by Grace Cale's Dubset (working on getting a scan of the sleeve) from 1983, a compilation of Birmingham post-punk bands circa 1981, and I haven't forgotten the request I received to repost the McCarthy "Red Sleeping Beauty" 12 inch.

In the meantime, I've been doing some research on this lady who sang on the "Southern Freeez" song I posted recently because it appears she didn't sing any other songs with that group and it really left me wanting more. There's something delightfully casual and effortless in her delivery that really appeals to me. Well, her name is Ingrid Mansfield-Allman and apparently she played a gig in the UK with some other folks as recently as last July. She did some work with Chaz Jankel & Ian Dury back in the early 80's, and they wrote a song called "Stop Wasting Your Time" that she released as a single in 1981. Here is a link where you can hear the song, it's very good, and surprisingly her vocals remind me of Kirsty MacColl (another rather effortless, casual singer, it seems to me)!
Posted by Bimble at 7:09 PM No comments: 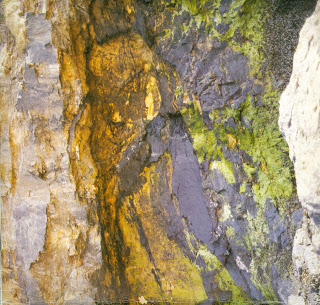 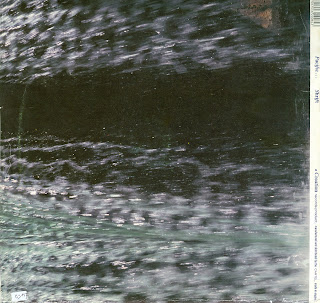 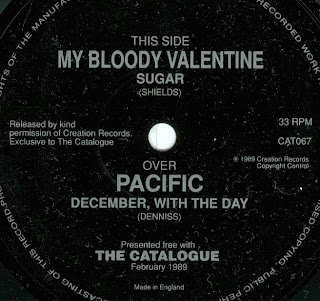 Please think of this as the companion piece to the Felt record I posted here. There are a couple very distinct reasons for this:

1) Both bands were on Creation

2) Both bands did two classical-sounding instrumental b-sides that I included on a mixtape in 1989. Here those b-sides are called "Autumn Island" & "Mineral". Rest assured, this is more Durutti Column territory, strings & piano and atmospheric gorgeousness. I feel so terribly lucky to have reacquired this record with such mercifully good vinyl quality.

On the A-side, though, "Shrift", they tried to sound like Brotherhood-era New Order. It starts out with strings like classical music (sounded fucking ace when I accidentally played it at the slower speed, too - I should bloody record that because it is so goth). Sortof sounds like Paris Angels, too. I think maybe they tried too hard on the A-side, but it's glorious, nonetheless. Excellent stuff.

As for the last track, "December, With The Day", it appeared on a flexi disc from a magazine called the Catalogue in 1989 and was never officially released on another one of their records. With this track, they are back to poppy, danceable New Order territory - with lots of strings, as always. Sound quality on this is fantastic considering this is a bloody flexi disc that is 20 years old! The vinyl gods have been kind to me, I think, and I am thankful.

As for this band Pacific, they had one other record on Creation just before this Shrift 12", and I can't recall the name now...Sea of Sand??? I think it had about 6 tracks, something like that, and I didn't like it much. Don't have it anymore, either.

Didn't they go on to release an album, too? I'm really not in the mood to do the research right now. Maybe later.
Posted by Bimble at 1:51 PM 1 comment:

Okay, Question Men LP is reuploaded here. Please don't ask me to ever play that record again. They're cute and funny for about the first 4 or 5 plays and then I run for my life. Even if I lose everything on this blog again, I will never, I repeat, NEVER rip that record again. Pure torture.
Posted by Bimble at 1:47 PM No comments:

People looking for the Simple Minds gig I mentioned should look carefully at the original post. :) :)

Someone requested the Question Men LP to be reposted. I have no problems with ripping that again, it's fun. Should have it done by the end of the weekend.
Posted by Bimble at 7:51 PM No comments:

This is a mega-cool song I just discovered. Why this didn't chart in the U.S. I don't know. A Certain Ratio-style funk. I'm got to have more of this band. They sounded more electro a couple years later when they charted with "I.O.U.", which is NOT the same as that "AEIOU" song by EBN OZN from about the same time period, so don't get confused.

Posted by Bimble at 7:42 PM No comments:

What was this? 1983? Something like that. I don't care. This is fucking godhead. All the hairs on my arms stand on end at the end.
Posted by Bimble at 8:50 PM 1 comment:

I found a Simple Minds gig from 1984 that is better than heroin. It's a New Jersey gig from 27th of May. I believe it was broadcast on the radio. I don't usually get excited about gigs but this is something else, the whole thing. Check it out here.
Posted by Bimble at 11:56 AM 5 comments:

Posted by Bimble at 8:10 AM No comments:

Where The Hell Is Leicester? LP 1981 Reposted

As requested, the Where The Hell Is Leicester compilation LP has been reposted here.
Posted by Bimble at 11:47 PM No comments: 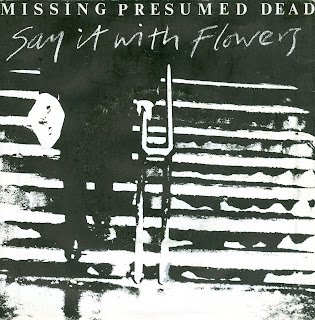 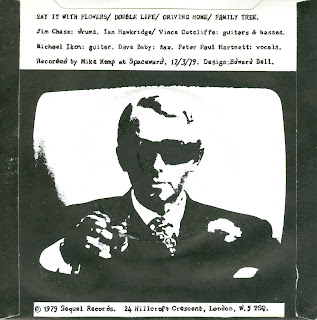 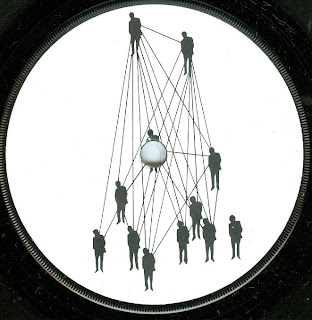 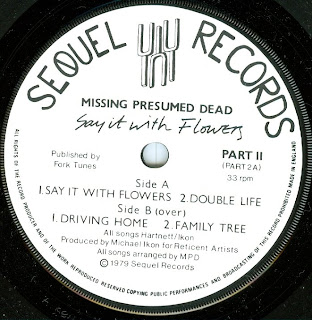 I've had this for awhile and didn't post it because it's on someone else's blog or other. Basically this band's whole discography is on blogs already, and I did mention them before here, but what the hell. Well, they were obviously British but I don't know where they were from exactly and I'm too tired to try and look it up right now. They are dark at times but also delightfully boppy/tuneful at others. "Driving Home", the 3rd track on this, finally brings the synth to the fore. This song is definitely in the "goth" vein, as it was meant to be in the old days before it was even called goth and before all the silly poseurs raped the genre of it's pure meaning. There is echoing sax at the end of the song that is just excellent. Music that isn't British just can't be as good as this band, sorry. No way. "Family Tree", the last track, is truly post-punk at its finest, but I could say that about this entire record, really.
Posted by Bimble at 10:58 PM 4 comments: 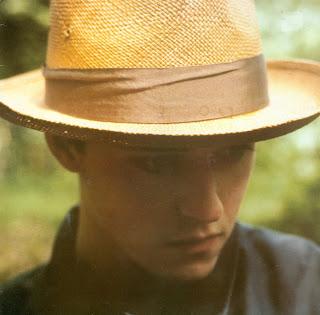 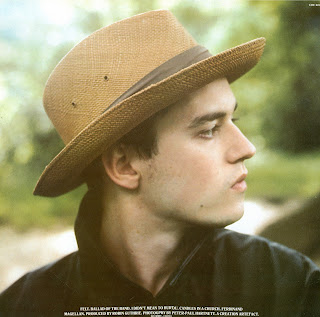 Well, this is Felt. People have all kinds of different opinions on Felt, but I'm not really here to start a Felt discussion. The only reason I'm posting this record is for the two solo piano instrumentals on the B-side, one of which, "Candles In A Church" is impossible to find on CD as far as I know. The truth is, I haven't owned this record in a long, long time and it's absolutely wonderful to have it again. A long time ago someone told me that if I liked these two piano instrumentals, I should check out Eric Satie's work. Well, I checked Satie out and was baffled at the comparison. It wasn't the same thing at all. Go figure. Anyway, anyone who digs Durutti Column ought to like these two instrumentals. To be fair, there is a place for Felt in my life outside of this stuff, but I'm just not in the mood to go into that right now.

This record has a companion post on my blog here.
Posted by Bimble at 10:32 PM 8 comments:

"Crash Through The Eyes of A Woman"

Of course it's the Dave Matthews song. I feel such a terrible peace in my heart when I hear this. Just about want to die.

Posted by Bimble at 2:26 PM No comments:

Thank you, you know who you are, for reminding me of this and to post it again:

Necropolis of Love singer has posted to this blog

It looks like the most popular download on this blog (at least since ZShare's one-way trip to the void) is the Necropolis of Love EP. The singer has just posted a comment to the thread. To find it, click here.
Posted by Bimble at 4:39 AM No comments:

I have plans to upload records to this blog but 2/3 have not arrived in the post yet.

It's all in the post, what I have planned. It's in the post. Sorry.
Posted by Bimble at 9:02 PM No comments:

Posted by Bimble at 2:07 PM No comments: 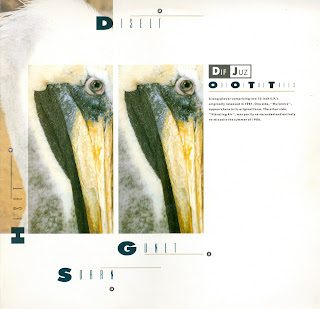 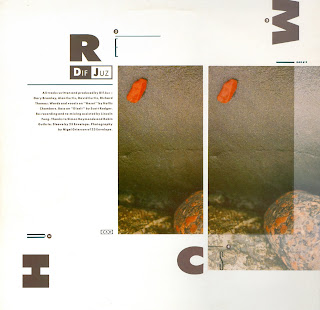 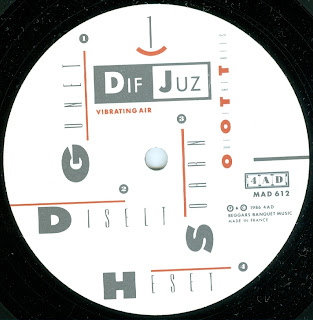 Let me try to explain as best I can. There were two early EP's by Dif Juz on the 4AD label in 1981. One was called Huremics, the other was called Vibrating Air. After they released the "Extractions" LP in 1986, with the help of Robin Guthrie's heavenly production, they decided to reissue these two early rare EP's on one record. On one side, the Hurmeics EP appeared, exactly as it had been on the early release (and you can now find it on the essential "Soundpool" CD). On the OTHER side of this record, however, some shenanigans took place which have never ever made it to CD. The EP was originally called Vibrating Air and you can find it in its original form on Soundpool as well, but well...I refer you to the words on the front sleeve of the Out Of The Trees LP:

"A long player comprising two 12-inch E.P.'s originally released in 1981. One side, "Huremics", appears here in its original form. The other side, "Vibrating Air", was PARTLY RE-RECORDED AND ENTIRELY RE-MIXED IN THE SUMMER OF 1986

Now, before anyone gets TOO excited...I am still not entirely sure that the first two tracks on this are really much different from the Soundpool versions, if at all. But the LAST TWO NEED TO BE HEARD. Check out the vocalist dude for "Heset" when he sings "Vibrating Air". That is to die for.

Anyway I hope this post makes someone happy.
Posted by Bimble at 10:41 AM 2 comments:

This video is really killing me right now. If you are patient and watch, you will see the camera finally zooms in on that building of that club called The Factory that Saville & Wilson are pictured outside of in that other photograph that I think is in that Saville book or whatever. Or in a documentary or some book somewhere. You know what I mean. Anyway...haha the music is um...pretty spectactular, too.