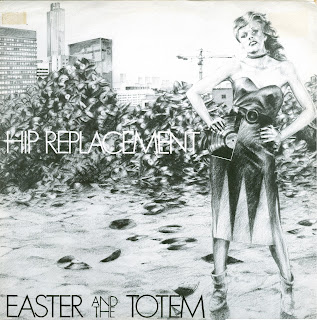 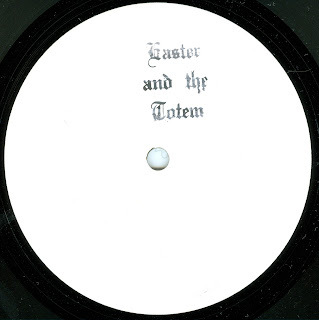 Easter & The Totem - "Taboo", 1982
Many bands get compared to Joy Division but I think in this case the comparison is especially apt. Not that these guys are as good as JD, but that is certainly the style they were going for with their debut 1982 LP entitled "Hip Replacement". You can see from the picture of the inner label that this was truly a DIY affair, not too fancy...except for the fantastic sleeve. I mean do record sleeves get much better than that? I don't think so. Anyway, the way this record was mastered to vinyl was less than ideal...the sound is sortof muddy sometimes (though not unlistenable) and I found a skip in one song that I was unable to correct no matter how many times I trained the needle with a steady hand. The good news is that West Nile Records realize the missed opportunity with this record and are going to attempt to clean up the sound and release the whole thing on CD in the near future, so I won't post the entire LP here, just the first song. Apparently Easter & The Totem are still playing music today (gotta admire that kind of stubbornness I think) and you can go look at their myspace page to learn more about them. You can also hear another track from this LP at the West Nile Records site. Incidentally, I found out about this band from the compilation of bands entitled From Bromley With Love which is up on Mutant Sounds' site, I believe.
Posted by Bimble at 1:02 PM