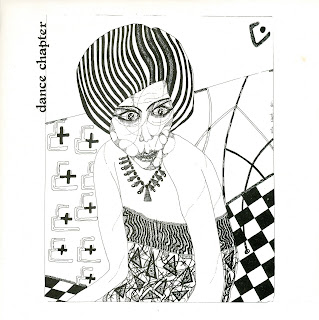 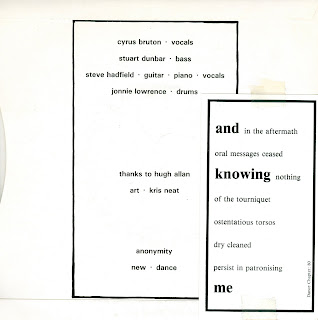 I'm not sure this band will appeal to everyone. I'm not even going to pretend I think it's one of the better early 4AD releases, but it's certainly interesting. The vocalist is a little strange, though. The 4AD website compares them to Joy Division and for the A-side I can see that. They released one other record on 4AD after this one - a 12" EP - before calling it quits. I don't believe any of the members of this band went on to do anything else musically. Notice in the photo for the back sleeve that there was a little card included inside the record with a poem on it. I taped this to the back of the 7". So far I've tried to stay away from posting any of the early 4AD 7"es that were later compiled on the excellent "Natures Mortes - Still Lives" compilation, but then that kindof leaves some other singles that aren't as good as what is on that comp. I still think this single is worth a go if you're into this kind of music, though.
Posted by Bimble at 12:21 PM

I cannot tell you how much I love Annonimity - what a classic - I have not heard it for about 15 years now :-(

Well holy shit, I think that's wonderful! I'm glad it works for you! I admit I love hearing the first half of the A-side again...reminds me of when I was very young.

This is nothing but stunning! Contains more substance in one track than most albums of today. Thanks!

Please reup to rapidshare.com
zshare no working
Thanks

It's been reposted now. Just click on the link above.

Thanks
My collection at"
4ad4all.blogspot.com

Hi again.
Robert King here. I released a cassette album by Dance Chapter in 1984, 60 minutes of what was to be an album for 4AD plus demos and alternative versions. John Turner the drummer released a mini album 'The poet who lost his faith in nihilism' on his own label in 85. He came to stay with me for a weekend went out into the world and I've never been able to find him. Cyrus the vocalist discovered San Yasin (religion) sold and gave away all his belongings and disappeared. Maybe this stuff will appear sometime soon..... I'll keep you posted.