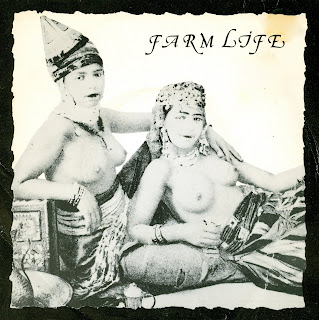 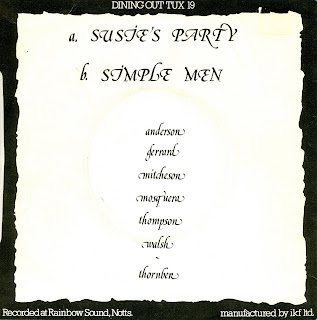 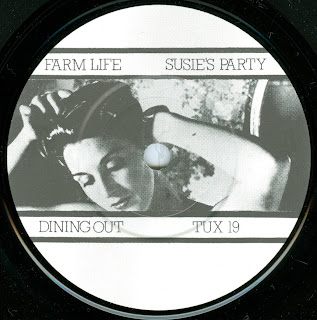 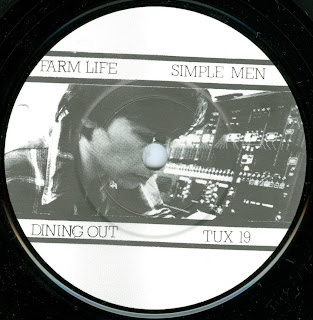 Here is another single on the Dining Out label, just like the Insex 7" I posted awhile back. This band don't sound anything like The Insex, though. I can't find any information about them online at all and I don't believe they released any other records. I get a kick out of this single, I think it's rather funny in its quirkiness. The A-side consists of a simple guitar line that sounds like the Byrds or something (maybe it's a Rickenbacker guitar) and a hilarious-sounding woozy synth noise that will remind you of what one of those 45's with a big hole in the center sounds like when it isn't centered and you try to play it. It gives you that same seasick feeling. But perhaps the funniest part is the lyrics, all about some poor girl who "had a party and no one came/since then she's never been the same". Anyway I don't want to give away too much more about this song, it has to be heard to be believed, I think. It's not goth at all - not even bad goth - it's just fun DIY silliness. The b-side has a much more typically post-punk guitar noise to it, sounds a bit like Wire. This is a more enjoyable single than most but I suspect there's no way these folks could have come up with a listenable album. It's odd that there's so many names on the back too - I can't see how that many people could have played on this!

p.s. I really can't be sure this single is from 1982, it could quite possibly be 1981 but I was forced to guess by looking at the releases on Dining Out that were before and after it. I will be posting more records on the Dining Out label later.
Posted by Bimble at 1:44 PM

This is the first of the two singles of Farmlife, the other one is "Big Country" (1983) - if you have it...please upload it! ;-). They later evolved into the goth-grebo band The Bomb Party.

Oh I do hope you're just pulling my leg. I dearly wish I had that single, but it must be pretty hard to find. I've never actually heard of the Bomb Party before. Thanks for the information!

No, you weren't kidding were you? Wow:
http://en.wikipedia.org/wiki/The_Bomb_Party

To me, the flip side sounds a lot like Devo -- I cannot hear anything reminding me of Wire. What do you mean?

By the way, I just recently discovered your blog and really love most of the stuff you offer. Thank you!!!

Thanks for your comment, oldskool! The Wire-ness of the b-side I was talking about was more to do with the raw guitar sound and simplistic riff than anything else. It sounds sorta like Chairs Missing-era Wire to me. But hey, if you hear Devo, that's fine! I can't claim to be a big fan of Devo.

After listening again I can hear what you mean, especially the first notes without drums. Then the bumpy rhythm and escpecially the singing remind me of Devos "Hardcore" phase. I only like Devo until and including the first official album. Btw, not meaning to pontificate or correct you, just pleasant talking shop.

Of course! I love talking about music and I appreciate your enthusiasm. If you are into instant messaging, feel free to look me up on AIM (AOL instant messenger) as Bimble78 and maybe we can chat sometime!

Seems I'm too old for some things -- instant messaging is not my cup of tea at all. So let's keep it like this, OK? Cheers.

Haha! I'm too old for some things myself (mobile phones for instance!). Not a problem! Thanks for all your comments, oldskool. Perhaps you should have a blog yourself?

Nice idea, but almost anything I have has been posted during the last few years. And it is too time-consuming -- I must earn money, I'm afraid :(

Ah, I see. You must earn money, that is understandable.

But what you had that was posted during the last couple of years...was it on a bunch of
different blogs or only a few? I don't want to get too specific if you're not up for it. Just curious :).

"I must earn money" might sound silly, but I am self-employed and there is no defined spare time. Having a music blog would give me a too good excuse not to work most of the time ... Just listening to all that good stuff you and others offer takes me hours every day, and I can't resist.

I collected the music I did not have or have anymore from some 70 blogs. Of course mutant sounds was one big source. I discovered your blog only lately but found some very nice things I did not know or had lost.

Oh no! "I must earn money" doesn't sound silly at all, are you kidding? :)

I am overjoyed that you have gotten something out of my blog.

Might I ask what country you are coming from?

I come from Germany and now live in its former capital Bonn. During the 80s I lived in Munich and in Berlin, both cities had quite good record shops to keep up with the "new wave". But of course I missed a lot of music on really small labels without a major distribution like Rough Trade.

Well my guess was you were from Germany after all! Cheers.
Yes, Rough Trade was a distribution godsend.

Thanks again for your comments. Might I ask how old you are?

What made you think I was from Germany? My English?

I am 37 but it makes perfect sense that you would be ten years older than me.

I can't remember why I thought you were from Germany right now. Maybe it will come to me later.

I used to know this girl in the early 90's who was from Germany and she spoke perfect English except when she asked you if you wanted a cup of tea. I didn't want to correct her because she did so well otherwise! :)

What did she say: "Do you want?"? The problem in my experience is, many people think that Germans are rude, just because a) we do use politeness in speech but not as much as in some other languages b) if you do not live in the country that you learn the language of, you hardly learn all the polite vocabulary and you hardly have occasions to use them! So, in short, we *often* do not mean to be rude or too "direct" at all but just do not know better!

It was something about...she said..."do you want a tea?" and that was wrong, you know. In English you don't say "a tea". But she was so neurotic about her English, She was so sensitive about it. I never would have dared correct her. She spoke perfect English aside from that.

But never mind, oldskool I am so delighted that you have posted so much to my blog. Best wishes. I'm happy. :)

I keep trying to upload this French record to my blog but it seems to be taking a LONG TIME.