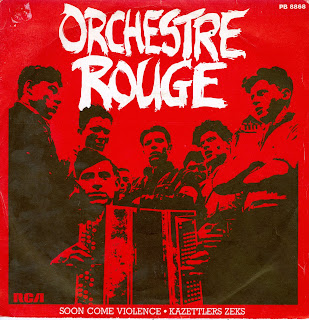 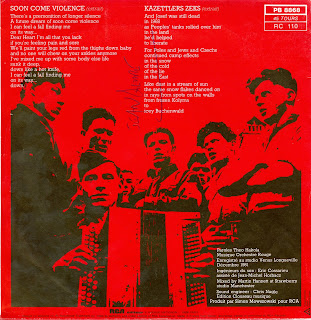 Here is some more music produced by Martin Hannett. Orchestre Rouge were from Rennes, France, and lasted from 1980-1984. They released a couple of albums but only one was Hannett produced and that is "Yellow Laughter" which I've included an especially strong (and uncharacteristically funky) track from here entitled "Crows". I suppose I could post the entire album in the future, though I don't have the sleeve art for it. I think I'm just going to describe these guys as garden variety post-punk and point you to the video of the A-side for reference:

One of the members of the band went on to be in Passion Fodder, who are also on You Tube if you're curious. I've never been especially impressed with them and they were certainly a different style of music. As for Orchestre Rouge, I'm not sure Martin Hannett's production necessarily worked for them. To be honest, I've got some live material of them that I think actually sounds better than the studio stuff. Go figure.
Posted by Bimble at 8:48 PM

Sure. I'll try to get to it in the next couple of days.