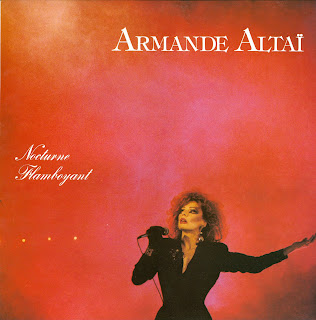 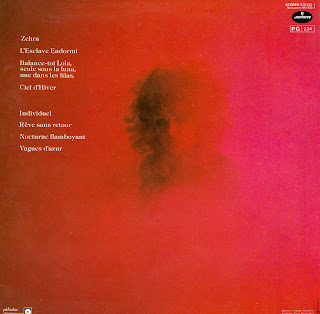 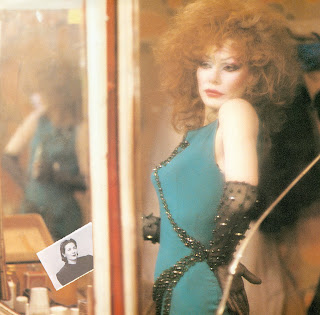 I'm very pleased to post this album because it's very rare and I really like it a lot. This was produced by Martin Hannett and I think this is one of his best productions. You can definitely hear his trademark sound on this. I love the way he can make piano sound icy, etc. I suppose this music is new wave, but it doesn't really feel like that, either. There are some synths but they are warm and unobtrusive. Some of the songs are quite catchy and some of them are just atmospheric and sad. Armande Altai is an interesting singer with a very beautiful voice. She can be kindof quirky at times like perhaps Lene Lovich or Nina Hagen, but then again, not really as far-out as them, either. She is very well-known in France as I understand it, and someone told me she apparently hosts (or hosted) a TV show over there in recent years that is sortof like a French version of American Idol. She released two albums previous to this one in '79 and '81. After Nocturne Flamboyant, she didn't release any albums until just last year when she came out with a brand new one that you can hear tracks from on her myspace page.

I have her two previous albums but was never able to get into them as much as this one. I admire her eccentricity, though, and it seems every album for her sounds different to the last one.

I would dearly love to see English translations of all the lyrics on this record because sadly, I don't speak French!

Oh! One more thing I almost forgot about this record is it has a song called "L'Esclave Endormi" on it that fans of the 4AD label will recall someone named Richenel doing a cover of (though I recall it being pretty unremarkable).
Posted by Bimble at 8:10 PM

Thanks for this very great album! I love Armande Altai! Do you have the album "Atavisme"?

I'm so glad you commented! But it's like I knew someone would ask me ...yes I have "Atavisme". I promise I will put it up on my blog for you. I have her other album "Informule", too. I'm not crazy about these records, but I promise I will do it. It will be an adventure!

Sounds fantastic! Thanks a lot in advance, I appreciate this very much!

Yes, I haven't forgotten Atavisme. I was thinking about it this weekend, in fact. It should be easy to do because I already have it burned to CD-R. I'll probably get to it next weekend if not before then. Thanks for your interest.

Zshare links are soooo ****!
I can't download the file

Man, my heart bleeds for you. I don't even have a CD-R of that rip, unfortunately. My entire computer hard drive was wiped out recently. I will have to rip it again. I'll do this ASAP, I promise. I will try to get it up tonight. I'm so sorry about ZShare, the fucktards.

Thanks very much for commenting and letting me know.

Ok, that's nice thanks!
I'll stay waiting for it... I love so much ARMANDE!

Hi, I'm not sure if you know this, but I already put this up again. You should be able to download it now.

Oh yeah, I didn't know it! Thank you sooo much :-) Great job my friend!