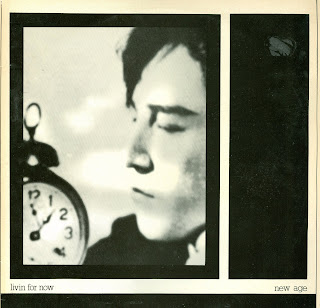 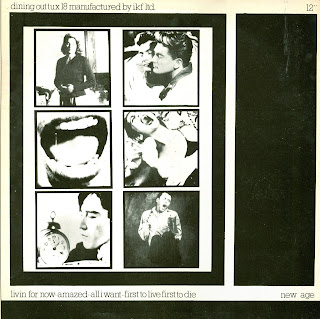 I want you folks to know I am working very hard on this blog despite heavy drinking this (holiday if you're in the US) weekend.

New Age was a band from the UK I don't know where. Yes Mutant Sounds already uploaded this EP to his blog ages ago with the rest of their discography but he didn't have any of the record sleeves because he got it all from me. I think this is some pretty good new wave, probably the best thing this band released. It's not cheesy new wave, though. Probably the best song is "First To Live, First To Die". It's nice when they add synthesizers. You know, I really love synthesizers but I don't usually like a lot of that European "minimal wave" stuff. Go figure.

Anyway I told you I am working very hard on this blog. I'd rather be listening to Rick James' "Give It To Me Baby" and U2's "War" album, but instead I'm churning out these blog posts about obscure post punk just for you.

Please make a commment on my blog if you appreciate any of this. Thankx. Love, Peace...etc. It's every American's job to say that word "peace" I think. Hell with gasoline. We're all going to die from global warming etc. Where's my Rick James? That song "Give It To Me Baby" I can't stop playing it. Rick James is the shit. I've got the whole album of his "Street Songs" now. And that's why I love life, baby. That's why life is worth living: Rick James. This song "Ghetto Life" jesus. He was only 7 billion times better than Prince.
Posted by Bimble at 3:46 PM