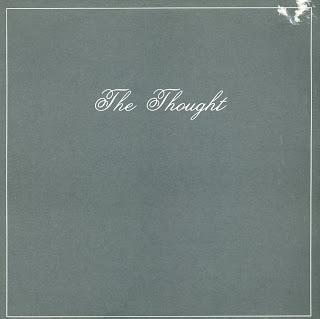 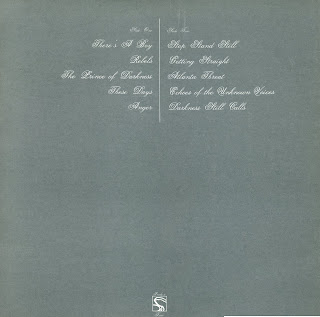 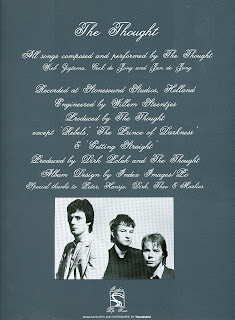 I bought this LP about 4 years ago and liked it at the time, but haven't played it since and I'm rather stunned at what I hear now. Fans of The Sound should hear this. Synthesizers are here, too. Good old fashioned gloomy, doomy, weird post punk. I love it. And I am going to get that other record of theirs soon that appeared on a major label because I can just about see the sleeve in my mind from seeing it in record stores way back when.

This record I link to here sortof sounds like Wire at times - "Atlanta Threat"...there's something about the guitar on that that reminds me of Sad Lovers & Giants too! There's a specific song I'm thinking of by SLAG right now from "Feeding The Flame"...(god that album kills me - talk about Goth)

The Thought were a Dutch band. That's about all I know about them.

I would be interested to know what other folks think of this record.

Also, I acknowledge the flaws in the sleeve here as I have posted it but I couldn't get around those flaws. If I'd tried to fix them it would have forced me to leave out other cool things about the sleeve, so I didn't touch it.

I've got a Dif Juz gig that would knock your socks off.
Posted by Bimble at 9:47 PM

You did it again! Thanks for sharing this discovery, I like it a lot. What's escpecially beautiful to me is the synth sound on some tracks that sounds like that on the first Flue album "One And A Half". Listen to "There's A Boy" for example. This slightly flanging pad sound. Must have been a synthesizer that was popular in the Netherlands then. Anyone who knows the model? Anyway, thank you very much, Bimble!

You are welcome, oldskool! I'm delighted to know you're still out there, it's great to hear from you again.

Flue! Now there's a name I haven't thought about in awhile. I never had any of their records but I do recall hearing them. I should probably check that out. Unfortunately I don't know what synthesizer this is, either.

I would really love to see this one re-uploaded. Zshare has crapped out on the download link. It keeps looping over and over again. It greatly appreciate it Thanks!