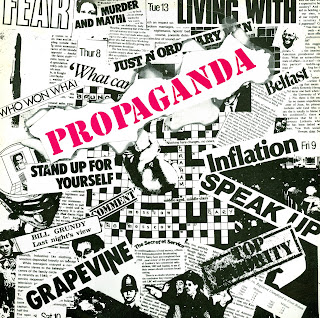 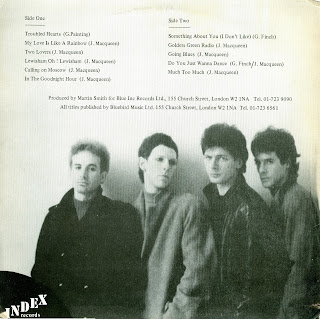 I recall "Calling On Moscow" being the single on this. It's so catchy! Power pop, eh? Pure stuff. I really like this record. The only reason I bought it was it was on the same label as that LP by The Thought I posted recently (Index records). But this record isn't anything like The Thought at all. This band were from London area, I assume, and I really honestly believe this could be called power pop. The only thing is a hallmark of a lot of power pop is singing about girls and there are a few overtly gay songs here rhapsodizing politely about men, if you can handle that.

I think if you like something like Bram Tchaikovsky, though, you might like this record. I wanted so much for someone to hear this record after I first got it. I'd been pleasantly surprised by an LP I'd merely taken a chance on, and how often does that happen? I wanted to share it with someone. But I couldn't get the guy I was trading post-punk with at the time to be interested in it, no matter how hard I tried to sell him on it with words. Weird.

Anyway, it's a terrible shame that their name is now likely to get mixed up with the later German group of the same name of which I am a HUGE fan and well...let's continue to the next bit of You Tube for a delicious slice of the OTHER Propaganda...
Posted by Bimble at 2:15 AM