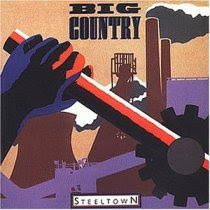 Unfashionable it may be in the midst of this blog primarily about obscure post punk, but I simply must bow my hat in print to this phenomenal and may I say it: perfect album. Yes, yes I had this LP long ago when it had first come out in 1984. But I hadn’t heard it in as many years until very recently and was just blindsided – by the sound, the passion, the fire of punk rock draped in a new, unique, and ultimately ancient Scottish colour – Steve Lillywhite producing, of course. The same man who made U2’s “War” as absolutely sonically amazing as it was when it came out. Not to mention that he produced another one of my favourite records – Simple Minds’ “Sparkle In The Rain”!

But we’re not giving enough credit to the Big Country band members. Truly I can see each of them separately contributing so much to the overall sound. I tend to notice each of them playing individually in ways I don’t normally do with bands. They truly are/were 4 gifted individuals. Also there are actually times when the guitars sound like the Cocteau Twins (Robin Guthrie) – like the beginning of the title track. And I must say that each and every bonus track on the CD (b-sides of singles) is freaking fantastic.

I won’t pretend to be someone who feels really able to write about music. Music is a gut thing for me that just doesn’t always translate into words. I’m not embarassed about that, it’s just a different thing to what most music journalists are into. I’ve never read anything about music that sounds as good as music does, or that pleased me as much as music does. Words are artificial to me in the face of music. But for the sake of sharing music, I try to communicate what music does to me in words. The fact that some people find that easy or can write long incisive essays about it baffles me, but this album is so great I wish I felt able to do that.

Next up will be another old 4AD 7”. This one weirder than the other two.
Posted by Bimble at 7:20 PM