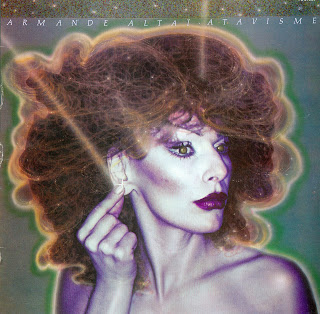 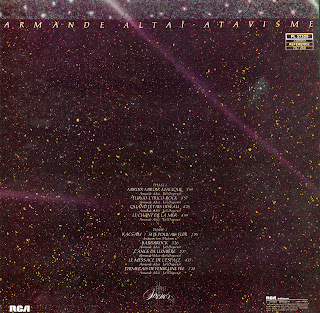 This one is by request. I had posted the "Nocturne Flamboyant" album earlier, which was produced by Martin Hannett. This album is not produced by Hannett, though.

What is neat about this lady is it's sorta like opera crossed with New Wave. That's the best I can describe this. Very European. It's really like a play...a dramatic play, theatre you know? Maybe it's not new wave at all. I wish I knew what the hell she was singing in English. Opera, she sings like opera. This guy she was working with on this album - Joel Dugrenot...she didn't work with him again. Her next album, "Informule" is totally different and sounds more like Roxy Music to my ears. I will post it in the near future.

I'm posting what I think is the best track from this LP separately called "Barbarock" for anyone who might not want to download the entire album and only wants a taste of what's in store, here. "Le Messace De L'espace" is also very good, very comforting. What a nice lady's voice! It is beautiful. France is a beautiful place. There is a lot of emotion in her voice even if I don't know what she's singing about. I have never actually been to France except maybe driving through the rural parts of it or being in the Paris airport.

Another French artist I am thinking of right now is J.J. Burnel from the Stranglers. I LOVE that song "La Folie" he does with them and I have his solo album "Euroman Cometh", too. It's a pretty good album. I haven't played it in a long, long time, though.

Anyway this is a neato avant-garde album from Armande Altai. I hope you like it.
Posted by Bimble at 11:53 AM

Thank you so much! I really appreciate this very very much! Fantastic!!

You are welcome! I will be putting up her "Informule" LP album, soon. I have it right next to my computer in clear sight and I have not forgotten! :)