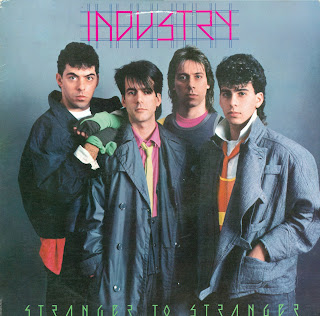 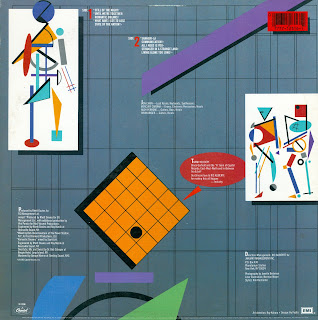 The first and last album by this fine new wave band, Industry. As I said in my previous post on this blog, Jon Carin (guy on the right with the awful mullet haircut) was now a big part of the band's output and I think his songwriting much improved things for them. When I found this LP for only a few dollars in a record store a few years ago, I only bought it because I remembered having an EP of them when I was about 13 years old (and this EP had songs that appeared on this LP, so there is no need to own it if you have the full LP). I expected just to laugh at it as a historical and dated curiosity, but instead I found I quite liked this entire album. Like I said, I think the songwriting is really strong here, and he has a pretty good voice, too. This fascinating wikipedia entry about him says that after this album, he went on to play with Bryan Ferry, Pink Floyd, The Who, Psychedelic Furs...!! I don't wish to discount the contributions of the rest of the band on this album, though. It's not a one-man show, here, obviously.

Here, once again is the You Tube clip of the single from this LP entitled State of The Nation
Posted by Bimble at 1:09 PM

I have this album on vinyl after stumbling across a couple of mp3's of Romantic Dreams and State of The Nation a few years back. I woul love a copy of the album for my ipod, is there any chance you could please re up the file.

I Would love a copy of this album for my Ipod. Is there any chance you please re up the file.